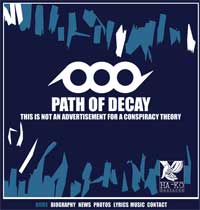 In March 2007 by band Path Of Decay released our first EP. And as a geek as I am, I had to create a website. Design was made by Ivana Bugarinović, our awsome drummer and a very talented artist. The idea was that the website should like the same as our booklet, so while going through the site you would actually read the booklet.

Frontend was created in flash (and actionscript 2) and backend was custom made in PHP. Site had all the traditional parts like biographym photos, lyrics, music, videos… All the content was loaded from XML files.

Later I’ve created a “lite” PHP only version of the site.

This entry was posted in Flash, PHP and tagged actionscript, flash, php, website. Bookmark the permalink.